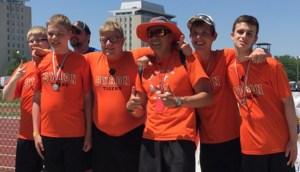 The Summer Games is a competition with over 4,000 athletes competing in six sports. Byron students did a fantastic job representing the community in swimming and track and field.

The boys received Silver in a very tight race against 7 other competing teams on such a hot day!